Another early morning day! Though we said we need to be earlier but i guess, i just could do wake my butt up at 5am! LOL!!

Fushimi Inari-taisha is the head shrine of the kami Inari, located in Fushimi-ku, Kyoto, Kyoto Prefecture, Japan. According to recommendation, it is the longesssst Senbon Torii – two dense, parallel rows of gates (“thousands of torii gates”).

The shrine sits at the base of a mountain also named Inari which is 233 metres (764 ft) above sea level, and includes trails up the mountain to many smaller shrines which span 4 kilometres (2.5 mi) and take approximately 2 hours to walk up.

You don’t even need to worried about getting lost or where to go, like any tourist spot, just follow the crowd! If you want IG worthy photo, come EARLY! 6am 7am?

It’s hard to get a spot without photobombers by daylight!

Fushimi Inari is definitely recommended if you’re visiting Kyoto (for the first time)! Not sure if i will go again, but if i do, i will probably do a 4am trip or evening trip!

After we’re done with Fushimi Inari, we head of to Kinkakuji! OMG, that was my most terrible decision! Don’t get me wrong, the place is beautiful but the crowd is not!!

We took a bus to Kinkakuji and upon alighting, i almost wanted to u-turn and go back! IT’S THE MOST CROWDED PLACE I’ve been too during the whole trip – partly because it’s already late morning i guess..

Upon entering, you will see nothing but lotsa tourist busy getting their best shot of the temple, doing selfie, doing wefie.. while i was shooting for my mom, they just went right through and stand beside my mom for their picture!?! both of us were like..

Hence we didn’t actually spend a lot of time here. One shot each and left. I can’t emphasize this enough – BE EARLY for tourist place!! I’m glad i only planned one spot per day (morning) and free & easy there after! Kinkakuji was our f&e spot and i guess, timing was not ideal!

Day 4 – Most anticipated day!!!! We’re going to NARA!!! Can’t even remember who recommended me to go Nara!! It wasn’t in our plan initially as it was kinda far (but again, Japan is so big, where isn’t far?) as it’s kinda out of the way.

Took some time to google how to go from Kyoto and well, it’s actually not difficult to go there, plus so many of them recommended us to go and here we are!!!!

Upon alighting the bus, you will be greeted by deers! No need to get too excited (yet) seeing them.. as you walk in, you will see even MORE!!

There’s deer biscuit available for sale if you want to feed them. However, do note that the deer gets more excited than you when they see the biscuit!! hahahaha!! Less than a second you’ll probably be surrounded by all of them!! Yup, they aren’t shy at all – which is a good thing i guess?)

We continue on foot to Todaiji and we saw even more deers!!! Some are resting, some are eating (grass), some just strolling (waiting for biscuit)! Mama was kinda excited and scared at the same time (pretty obvious from the photos)! Actually we both are but the deers are really gently – although one tried to ate my bag thinking it’s food (?) but no harm was caused!

If you’re in Nara, do make a trip to Todaiji!

Tōdai-ji (東大寺, Eastern Great Temple) is a Buddhist temple complex that was once one of the powerful Seven Great Temples. Though it was originally founded in the year 738 CE, Todai-ji was not opened until the year 752 CE. Its Great Buddha Hall (大仏殿 Daibutsuden) houses the world’s largest bronze statue of the Buddha Vairocana, known in Japanese as Daibutsu (大仏). The temple also serves as the Japanese headquarters of the Kegon school of Buddhism. The temple is a listed UNESCO World Heritage Site as one of the “Historic Monuments of Ancient Nara”, together with seven other sites including temples, shrines and places in the city of Nara.

Both mama and me felt this this is one temple worth going again! By the time we leave, Nara Park starts getting crowded! We were happy that we actually made it here EARLY this time!! Although it drizzled but didn’t dampen our excitement at all, by the time we leave, we’re still very excited!! 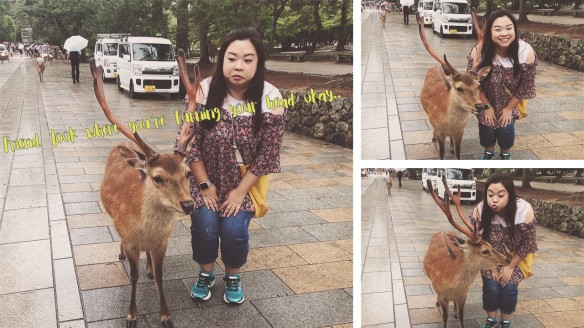 Saying goodbye is hard, but our stomach will probably go on strike if we still don’t feed them! We went Nara really early we haven’t hard any breakfast!! We head back to Kyoto and went back to the matcha restaurant to try their main course this time. We’ll all i can say is, dessert is definitely better! 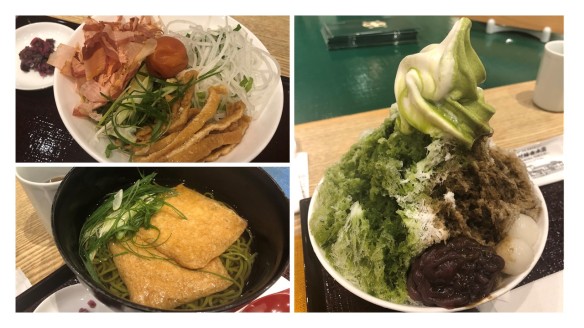 Throughout the day, we did not take any more pictures as we were busy getting souvenirs and gift for family! We were so worried we our luggage will be super over weight!! 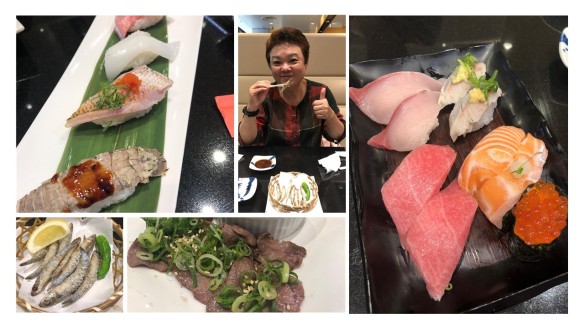 By evening, we were all tired and hungry (again).. a simple dinner fixed and we head back to hotel to pack our bag before we return to Osaka (our last night!)

If you haven’t read my previous post, check it out from below link: